No posts since March 2020? Really? To claim it was Covid-related would be an understatement.

The year, plague year 2020, has been catastrophic on all levels for many people. I have to report that I have been one of the fortunate ones. As a professor in higher-ed., it has been quite a task alone to work through these times, but many things have happened, and some have fallen by the wayside. In a year of pandemic, upheaval, and tumult, I have been uplifted by all the writers and publishers who have not been daunted by 2020. Here’s my year-end work summation:

Picking up from March 2020 I was scheduled to read some poems for the GRCC Public ENG DEPT Reading Event on Mar 26 but this was cancelled due to Covid. I found a new market with the incredibly prolific and subversive ALIEN BUDDHA PRESS and published the following poems: “Eviscerated” and “Private Hell Perdition” in Alien Buddha Press Gets Rejected, “Nightmare Tracks” in Alien Buddha Press HOUSE OF HORRORS 3, followed with a SONGS OF SELAH podcast reading live on Halloween, and “From The Office Of Dead Letters” THE ALIEN BUDDHA WEARS A BLACK BANDANA.

My work in the Weird Fiction and Art community has continued with: A review of Matt Cardin’s TO ROUSE LEVIATHAN “Epistemological Alchemy” in DEAD RECKONINGS #27 from Hippocampus Press Spring 2020 and reviewed Richard Gavin’s GROTESQUERIE from Undertow Publications “A Weird Tarot Deck” and Robert Eggers’ film THE LIGHTHOUSE “The Light That Never Warms” in DEAD RECKONINGS #28 Hippocampus Press Fall 2020 . I was delighted to be accepted in S. T. Joshi’s new scholarly journal of Weird Fiction with “The Cosmicism of Elfland” in PENUMBRA No. 1 also from Hippocampus Press!

Fell short on a short story publication this year but managed to make my goal of tripling last year’s output. There have been other derailed projects. As lockdowns have devastated the music industry nothing has been done or has happened with THE HICKKICKERS or other music side projects. Along with that, the release of what was REALMS OF FANTASY 2020 by Mythopoeia Games Publications has been delayed to 2021 and will be retitled REALMS OF FANTASY COMPLETE. Lastly, the “Bullets For Breakfast” script is all but over on its path to production.

We have two new cats — VINCENT and VICTOR in the home to make the year and I have been admitted to the Esoteric Order of Dagon (literary branch). Lastly I will be writing in the 2021 MARCH PLAIDNESS competition writing for HELMET and their song “Unsung.”

Accolades to everyone else that has endured through plague year 2020. On to 2021!

I am pleased to announce Mythopoeia Games Publications has made the following RPG supplements I authored available to help with our isolation: “Games are great way to get through isolation. Why not try a new RPG to help pass the time? For the next 15 days (through April 1st) we have made our We Hate Bards tested core Apocalyptic Fantasy RPG E-Book “Wizards & Warriors” pay what you want at DriveThruRPG (that means FREE if you wish) and all our supporting e-book supplements are ninety-nine cents. We may extend this even longer to weather the upheaval in pursuit of games (and adventure). If you play a session share it at Realms Of Fantasy RPG.” Enjoy!

The latest issue of Spectral Realms (No. 12 Winter 2020) is available from Hippocampus Press edited by S. T. Joshi featuring the work of today’s greatest working poets of the weird and also includes my poem “Black Wings Return.”

On January 22nd 2020 special one-day only screenings of Richard Stanley’s Color Out Of Space (an adaptation of H. P. Lovecraft’s “The Colour out of Space”) extended cut will be shown in select theaters across America.

I have been asked to give opening comments for the screening at the UICA (Urban Institute of Contemporary Arts) part of KCAD (Kendall College of Art and Design). It was quite a pleasure to teach this story a year ago at KCAD in Genre Studies: Weird Fiction, learn the film was in production, then have our own theater be selected to house the film.

Review will be posted later.

(PS – special shout out to HPLHS.) 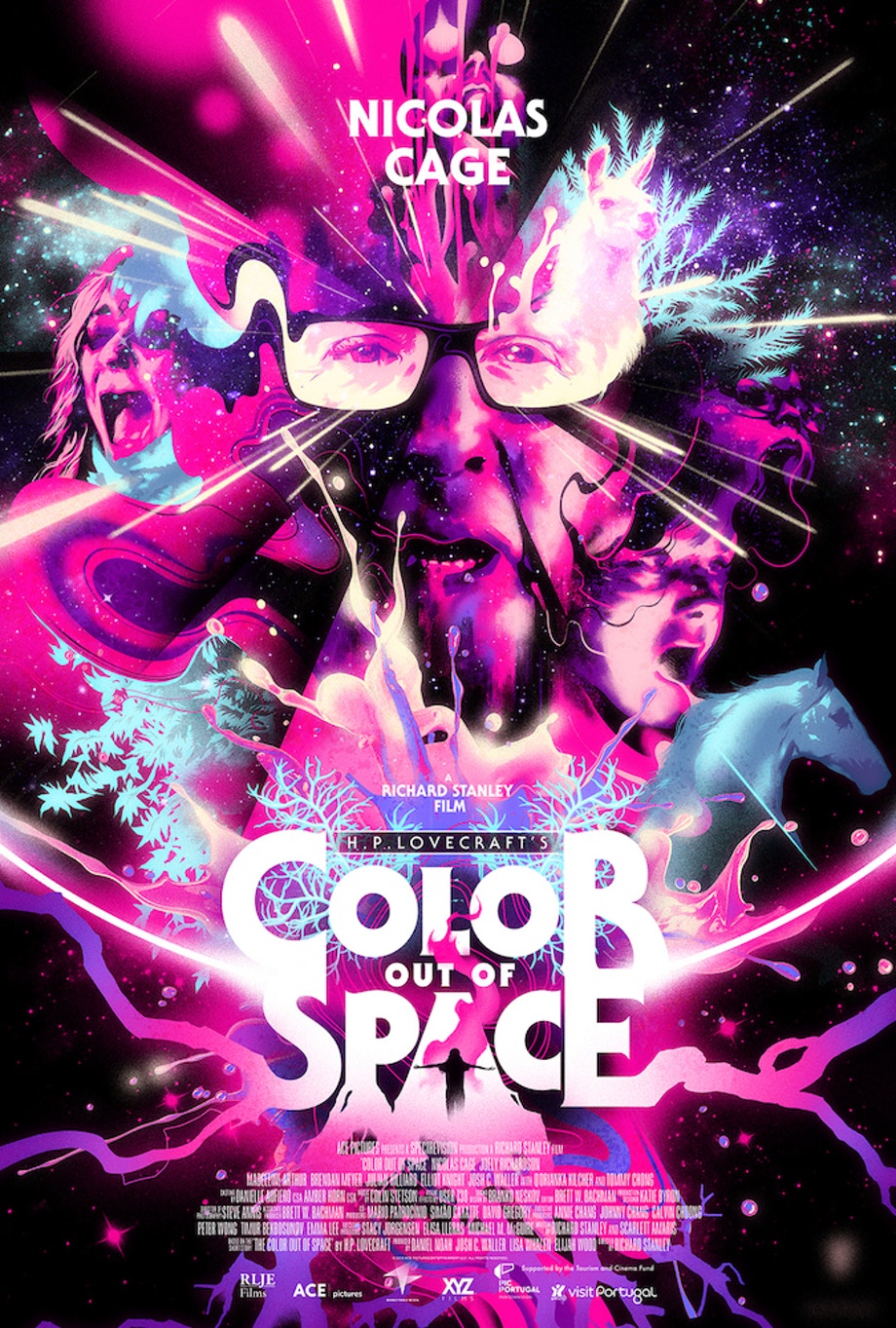 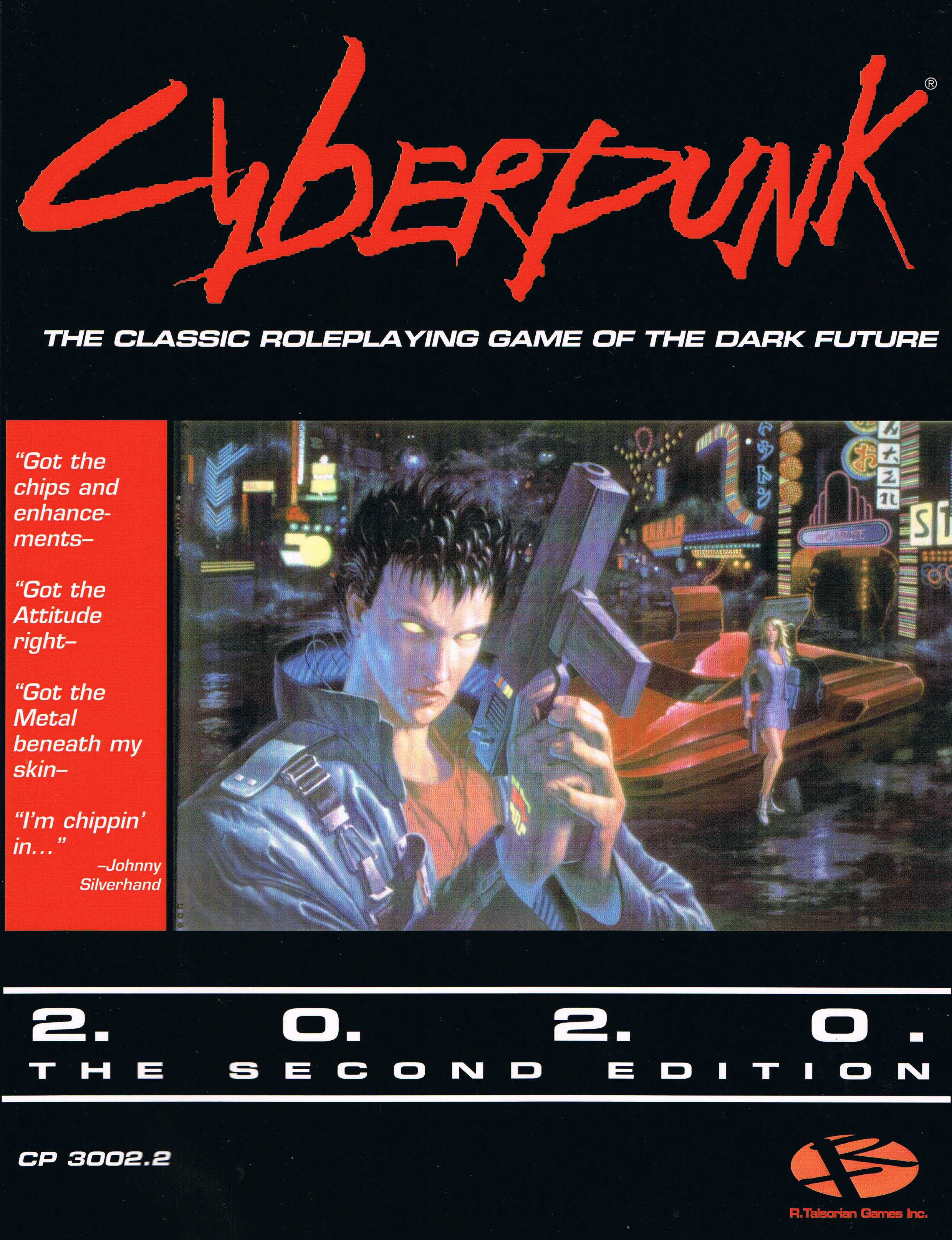 Here’s a little recap of my 2019 year in publishing:

Intent to double my work from last year (two publications) and ended tripling 2018. Next year’s goal: double 2019 — for 12 — 1 per month. So far my poem “Black Wings Return” will be in SPECTRAL REALMS No. 12 Winter 2020. Here’s to good start. Best to all the other writers, editors, and publishers I know, have met, or corresponded with and all their works of 2019.

Are we Cyberpunk enough yet?

At long last I am elated to report that Realms of Fantasy RPG Sourcebook III: Perils & Prowess has finally been published.  This was a long arduous task and I hope you’ll enjoy what lurks behind the cover.  This entire book is illustrated by the one and only Brook Anderson and also ends my work on this version of the game. The link above takes you to DriveThruRPG where you can order the e-book.  Hard copies can be ordered directly thru Mythopoeia Games Publications.

There may be more yet before the month is over.

As Lin would say, Happy Magic!

The latest issue of Dead Reckonings (#26) featuring my review of S. L. Edward’s Whiskey and Other Unusual Ghosts is available at Hippocampus Press.  Was a pleasure to read this work as well as working in anecdotes around the Audient Void: A Journal of Weird Fiction and Dark Fantasy and many luminaries in the field (too many to name here).

What else is brewing this month… Realms of Fantasy SIII: Perils & Prowess is finished and with the editor then on to the printer.  Will announce ordering very soon. 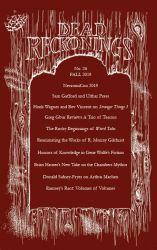 These last many weeks have been a blaze of activity.  My next poem for Spectral Realms will be out in issue #12, still laboring along with the last sourcebook for Mythopoeia Games Publications: Perils & Prowess.  In negotiations for a monthly streaming game with The Gamer’s Wharf.  Deeply at work on a few things hopefully for Robert M. Price and Necronomicon Press.

Bullets for Breakfast is no longer optioned and is free of all entanglements.  However, we have moved on to something new which hopefully I can announce later this fall…

As for the rest, last week we had a major heatwave followed by a 70 mph storm knocking out trees (and power — no AC) while helping move a good friend and family back to MI.  This month is starting of with a trip to visit another friend after a 24 year absence and a family gathering for burial services for my grand uncle in Mackinac.  Also wrapping up my summer course (July/Aug) in Film Studies: Popular and Unpopular Genres at KCAD.  (Great to see that Sunset Boulevard and 2001: A Space Odyssey are still resonating with first time young viewers…)

The remaining weeks before school have yet to be determined.

Hippocampus Press has has released Dead Reckonings #25 featuring a number of engaging reviews and articles by S.T. Joshi, Ramsey Campbell, Darrel Schweitzer and others, including a tribute to the late Wilum Hopfrog Pugmire and my article, “A Look Behind the Challenge From Beyond” especially for Lovecraftians and Howardians. An impressive issue at a great price. Order and enjoy.

Lastly, there are so many other developments happening this month I cannot list them all now. On with June Gloom.

Guilty as charged — broke the posting twice a month goal.  This April was an extreme wearing on the soul as teaching took every particle of concentration I could muster but that is done, grades are in, the semester is over.  Biggest achievement on the academic level was a great success with my KCHU 330: Genre Studies — Weird Fiction. We now have 28 more devotees to Lord Dunsay and Clark Ashton Smith!

Now StokerCon19 — sending this summary out today as tomorrow is Mother’s Day and I do not want to compete with their honor on social media.

Thursday started with “Whatever Walked There, Walked Alone”: Bad Places in Contemporary Horror.  As I teach “Hill House” every year this was a must and featured a great panel of writers including Nicole Cushing.

Friday had more excitement — Turn Your Fiction World into an RPG, Beyond the Sale: Working with Editors (with Ellen Datlow on the panel), Exit Stage Death: Writing Horror for the Stage.  This was an unforgettable treat and I encountered the thoroughly convincing Kyla Lee Ward for the first time. (I also scored a copy of The Land of Bad Dreams after and am now totally converted to her mastery of the strange.)

Today, last day — Weird Poetry panel, Going Wide — How to Reach an International Audience with E-Books by PublishDrive (awesome), 100 Years of Horror Movies: The Legacy of The Cabinet of Dr. Caligari, and Darce Stoker’s 120 Years of Dracula.  Excellent presentation, amazing depth of knowledge & research, and he (and J. D. Barker) signed my copy of Dracul.

As for the rest of April (and May), have many submissions out and more to go.  This month also… the pending release of Realms of Fantasy SIII: Perils & Prowess (meanwhile enjoy Mythopoeia’s May D&D Sale).